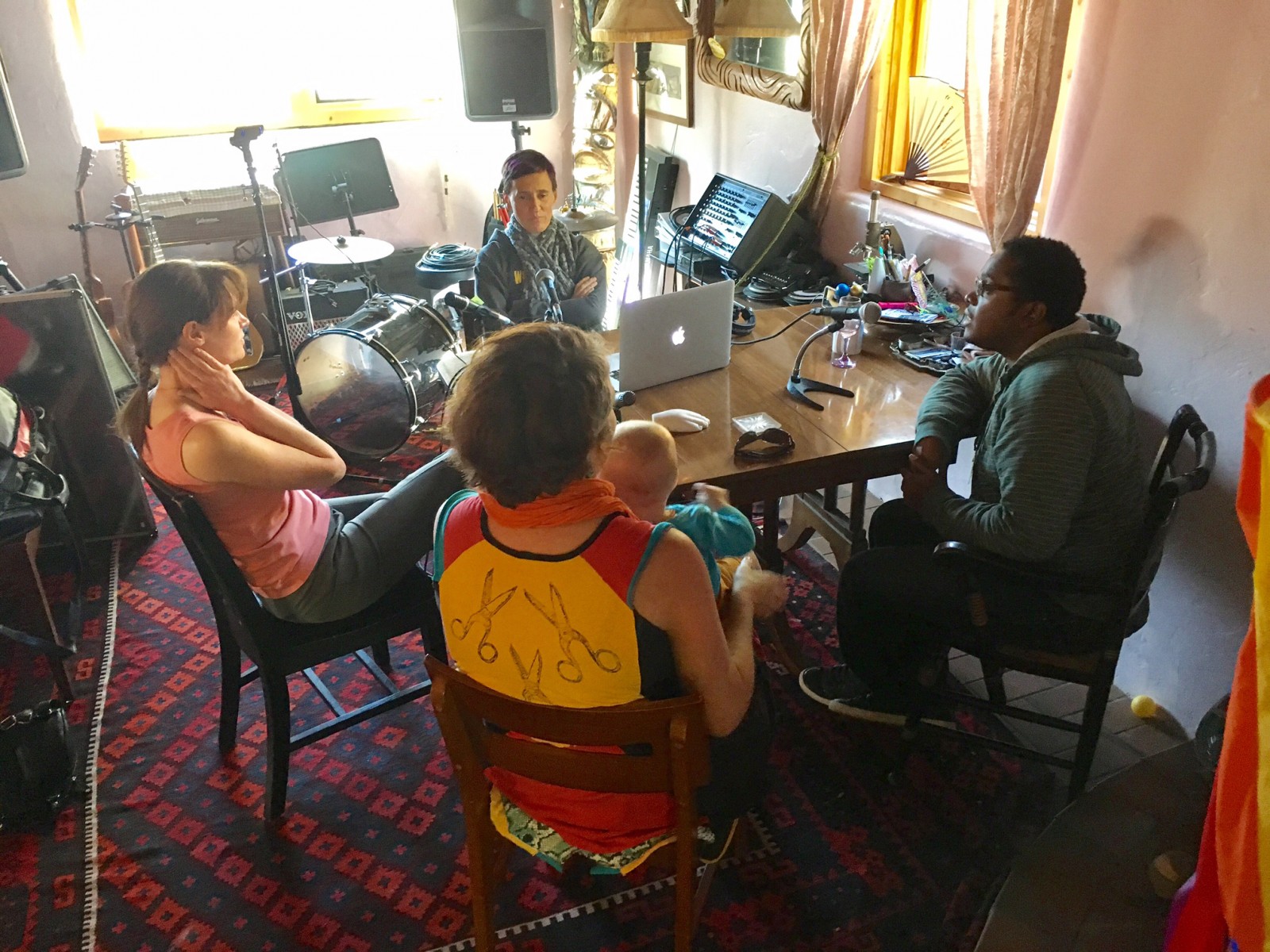 Early on Election night 2016 I wore my best vintage pantsuit and played a few hastily learned America-themed songs (my friend Matt‘s idea) at my local tap room as election results trickled in. I’d voted a couple weeks earlier; I had occasionally (and judiciously) shared my political views on Facebook in hopes of swaying the few right-wingers who might be lurking on my page against voting for a sociopath; I’d talked to my kids about elections and Democracy and racism and misogyny, including conversations about what a “pussy” is and what “sexual assault” is, which needless to say were not conversations I planned or wanted to have with my 10- and 7-year-old.

I thought we were about to have our first woman president, and felt sad that my 100-year-old fiercely Democratic grandmother who died 11 months ago didn’t live to vote and see it happen.

But by 9pm I was feeling very uneasy, and by midnight the creeping cold dread had consumed me completely, as I realized that TrumpWorld was dawning. Holy fucking shit.

Whatever I had done, it wasn’t enough. Many of my friends were 100 times more dedicated to political action and community organizing—and it was not enough.

We all had election fatigue even before the sucker-punch of Trump winning; how can we summon strength to continue to fight? What does “fighting” even mean?

My problem-solving brain has not been capable of shutting off since Tuesday night, so I’ve come up with a list.

1. Fight the feeling of hopelessness with a few bright spots of positive news. The popular vote was NOT won by Donald Trump. Yes, it is terribly depressing that millions of Americans are willing to vote for an open misogynist/racist/xenophobe/queerphobe/transphobe/sociopath to lead our country, but it’s also abundantly clear that millions of fellow progressives have gotten a brutal wake-up call and are now intensely motivated to work for change. (Count me as one of them.)

Bottom line is you’re not alone and the time is ripe to organize and rebuild communities. We can find strength in the fact that so many of us are feeling the same way—and while none of us wanted our political situation to be this dire, it certainly is cluing folks like myself into understanding that we had not been paying enough attention, and inspiring us to take action.

But most important reason your creative spirits should be buoyed is this: Creative folks have a special and incredibly important role in, and power to affect, social change. While the actual levers of political power may be in the wrong hands at the moment, artists and creatives have immense social and cultural power. Yes, this means you! YOU have power to reach hearts and minds, often in ways that politicians and campaigners cannot, and never will be able to.

Out of bed yet? Okay, it’s time to get dressed.

2. Open up your receptors and get better at listening. I was feeling so anxious at the end of election night I needed to channel it into something, so before going to bed I texted a few dozen artists and community organizer friends and invited them to an emergency community planning meeting at my house the next day. My goal was to start bringing voices together, both to grieve and to start sharing ideas for moving forward.

I especially wanted to push forward this concept that I have been obsessed with lately, that our society is splintering because we are increasingly incapable of listening to or hearing each other. People gather less in real life these days, and when we interact via technology it tends to be an echo chamber of like-minded views (see next point). For some time now it feels like there is fundamental structural failure happening in our social fabric.

How can we work together for our common good, if we can’t understand each other? How can we build coalitions if we can’t hear and absorb the experiences and perspectives of other individuals, and other communities? It feels like our receptors for learning from each other have been turned off, or maybe in this era of information overload, have burned out.

Both as individuals and communities, we have unique experiences and perspectives that need to be included in the process of community-wide problem-solving. I’ve been thinking about this for a while now, but since the election I’m quite consumed with how to achieve this, and on a personal level am embarking on a practice of radical listening. I have tendencies towards being a know-it-all smartypants and I’m dropping that shit and leaving my ego at the door in the interest of tuning my antennae into other perspectives.

I’m also thinking a lot about how to bring communities together and creating safe spaces so they can learn from each other. Re-stitching the social fabric, if you will.

3. Dismantle the echo chamber you have likely created for yourself on social media. Many of us have become overly reliant on social media for information about what is happening in the world, and too often we only see views from people we already agree with. We think nothing of filtering out (by unfollowing, unfriending, etc.) views and perspectives that don’t fit our narrative. If we don’t recognize this, we develop a false view of what’s happening in the world. Social media has intensely powerful social effects, both positive and negative, and we need to get a whole lot savvier about how this relatively very new type of info channel affects our perspectives of the world.

Bottom line: If you care about what’s happening in this country and the world, you need to make a point to educate and inform yourself from a broad set of sources. I’m not telling you to get off social media (though maybe you should), but we all need to understand it is a fundamentally flawed way to learn about the broader world.

4. Take care of yourself which in turn will help you help others. This is a marathon, not a sprint. We are all going to be tired (we are STARTING this fight tired). Recognize negative feelings like fear or despair or dread, and let yourself feel them—by feeling them instead of fighting them, bad feelings can flow through you and back out into the universe to be composted into new energy. Getting stuck in negative energy and thought patterns leads to burnout and paralysis.

Besides feeling your feelings, as creatives you have another self-care tactic: Make more art. Feel angry? Sad? Afraid? Create more stuff, keep realizing your vision, and put more positive energy into the world. You benefit and the world benefits. I love a win-win!

5. Learn the mechanics of how to get people elected into office, and learn how politics works, and make specific goals for change. I used to be more involved and aware of local and national politics, but over time I’ve found myself much more interested in arts and culture. I sometimes volunteer or donate money to political causes, and I’ll help promote fundraisers and causes through my online channels, but not much beyond that. I’ve watched friends get intensely involved with their local precincts and campaigns for local and state offices, and for whatever reason that didn’t feel like “my” kind of work.

Well, if for no other reason than to try something new, I’m going to make it “my” kind of work. I’m making a point to re-acquaint myself with the processes and strategies for getting people elected to office—like, specific direct action to get progressive people into actual government positions which confer actual authority and power over certain matters. It’s great to support the local artistic community, but I feel I’ve neglected some of the important on-the-ground political work, and it’s time to end that neglect.

It’s time for us all to learn some new tricks, and to take action. Let’s breathe deep and lift with our knees.

Along with some inspiring collaborators, I’m actively pushing forward some specific ideas for community planning and positive social change. We’d be most thrilled if you’d like to be involved. In a nutshell, the group that is emerging consists of creative folks interested in taking action to make a better world. Drop me an email at peri |at| pyragraph.com or in the comments below and we’ll keep you in the loop.